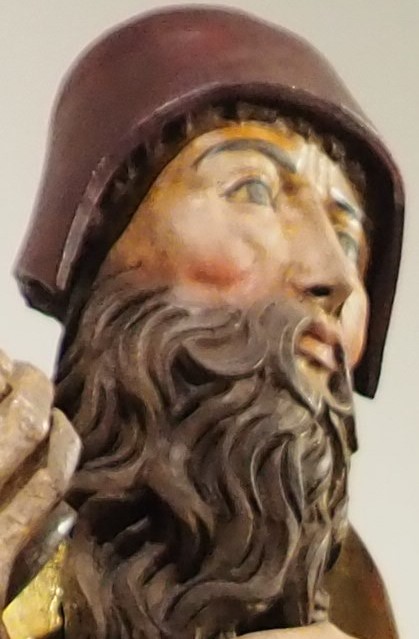 Could this possibly be how the woodcarver Master Paul of Levoča looked like? It is supposed that he had created the face of this apostle of the Lord´s Supper in the predella of the St. James Altar as his own portrait.  The woodcarvers´ hat of the period this apostle is wearing should draw our attention to this fact. Thus maybe his face is not as shrouded in mystery as some basic facts of his life. His works of art sing the song of his genius and they are a tangible proof which remained of his life.

Basic facts of his life are unknown. We have no idea where and when he was born and when he died. We just know his first name – Paul. To this name a title Master is added, as it was customary to address the creators of work of art in the middle ages this way, to distinguish them from regular craftsmen. Studying his creations experts suppose that he could possibly have acquired his artistic education in Germany, northern Italy or Tyrol.

Exactly during the time, when our genius Master Paul of Levoča had been creating of wood his gorgeous carved works of art in late gothic style, another world famous genius artist, Michelangelo Buonarroti in Italy had been creating his gorgeous frescos and marble statues or bronze statue in high renaissance style. Because exactly in the times of Master Paul activity, the meeting of two main middle age artistic styles – gothic and renaissance took place here.

Master Paul resisted “foreign” features penetrating into his art – i.e. renaissance influence.  He is the representative of late gothic style.  He was a pupil of great Polish sculptor  from Nuremberg  Veit Stoss, whom I have already dedicated an article on this website – see VEIT STOSS ALTAR IN KRAKOW.  However,  renaissance features eventually started to creep into his work against his will anyway.

Master Paul of Levoča is mentioned for the first time in 1506, in connection with his joining the Brotherhood of Corpus Christi in Levoča. It is supposed that he had already been living in Levoča at that time and that he had a woodcarving workshop there.

He created wooden statues of St. John the Almsgiver and of St. Leonard for the St. Nicholas altar, dated 1507,  in the Basilica of St. James  in Levoča.

He created the high altar for the Basilica of St. James in Levoča during the years 1508-1517. This unique St. James the Apostle altar is his only work which is signed.

This altar  is at the same time his chef d´oeuvres –  his masterpiece. This altar also holds a world record – reaching the height of 18.62 m it stands above all work of art of this kind in the world. Thus it is the tallest gothic wooden altar of the world.

It is followed by 14 m tall Leinberger Altar in Kastulusmuenster in Moosburg in Deutschland, 3rd being 13.70 m tall altar in Blaubeuren Abbey in Germany near Ulm, 4th is 13.50 m tall in Kefermarkt near Linz in Austria, 5th tallest with its 13.00 m is Veit Stoss altar in Krakow, which we already know very well.

Ranking 8th with its height of 11.00 m is Vir Dolorum altar – from this very St. James Church in Levoča. For those interested to learn more about this 8th tallest altar in the world, please look at my article BASILICA OF ST. JAMES IN LEVOČA.

Master Paul himself designed the altar and it is a proof that he was a good expert at geometrical harmony in gothic architecture.  He managed to  place his balanced altar into the church presbytery so, that it blends within its architecture into one organic whole.

He himself created the main statues. His workshop craftsmen were skillful, too,  and created beautiful ornaments and pinnacles.  Artists  who painted the panel paintings of the altar were also very highly professional. Paintings are copied after Lucas Cranach and Hans Schäufelein, the elder. These are not seen in photos here, as they are visible when the altar wings are closed.

The Lord´s Supper scene represents exactly the moment when Jesus is uttering the tragic words: “I tell you that one of you will betray me – one who is eating with me.”  We can see that only two apostles – Peter sitting close to Jesus and Judas whom the words concern,  are paying attention. St. John the Apostle is taking a nap between Jesus and Peter.  Other apostles enjoy their meals, drinks and each other company. This work is an example of renaissance style in Master Paul´s work. From technical point of work it is notable that  groups of two or three apostles were carved of one piece of wood.