Parts of present day Basilica of St. James in Levoča date back to the 13th century.  Main parts were constructed in the 14th century in gothic style and it was completed by 1370.  Later some additional parts were added in late gothic style. The most valuable works of art decorating it were created in the first quarter of the 16th century when Master Paul of Levoča came to live in the city.

Painting at the bottom right depicts the legend of the foundation of the Klosterneuburg Monastery in Austria.  Agnes, St. Leopold´s wife, lost her veil, as it was carried away by wind when she was on balcony of their castle. Search followed but the veil could not be found. However, by chance, many years later, while hunting, St. Leopold found the veil in the wood and subsequently founded the monastery exactly at that place. This painting is unique as it is the one and only depiction of this legend.

Vir Dolorum Altar with its height of 11 m ranks the 8th tallest wooden gothic altar in the world.  This makes it the second tallest altar of this church. As the coat of arms of the king Matthias Corvinus and his third spouse Beatrice of Naples is in the predella it is known also as Matthias Corvinus Altar.  Matthias Corvinus visited Levoča in 1474. It is not known for sure if the altar  was created in Levoča or if it was imported here. Around 1480,  when it was created,  woodcarver John had been living in Levoča. He could have been the creator of this altar. Larger statue in the middle represents Jesus –  a man of sorrows.  The face of the Virgin Mary to the left is supposed to be the portrait of Beatrice and the face of St. John the Apostle to the right is supposed to be the portrait of Matthias Corvinus, it certainly shows many of his features.  We can see open wings and paintings represent: Top left  – St. Sebastian and St Christopher,  Top right – St. John the Baptist and St. James the Apostle, Bottom left – St. Barbara and St. Catherine, Bottom right – St Dorothy and St. Margaret and they were painted probably by painter Nicholaus of Levoča.

Mural paintings – Levoča Moralities, were painted around 1390.  Painted probably by a painter from Bohemia.

The upper row represents the Seven Deeds of Mercy.  The figure of Jesus Christ has golden halo and each of the corporal and spiritual works of mercy is worked on him by a noble lady and a noble man – city burghers. Jesus is painted in each painting facing the High Altar of this church.  We have to look at the individual paintings from left to right:   1. Visit the sick    2. Shelter the homeless    3. Feed the hungry   4. Give drink to the thirsty   5. Clothe the naked    6. Comfort the imprisoned    7. Bury the dead

Other series of paintings on the northern wall of the church depict the Legend of St. Dorothy – Dorothea of Caesarea. This legend was widespread in the Middle Ages. With 20 pictures this is the most extensive series dedicated to this legend in central Europe.  The painter was probably from Germany and the paintings date back to around 1420

Altar of St. Peter and Paul was created around 1495-1500 in the workshop existing in Levoča before the arrival of Master Paul.  Statue representing St. Peter and St. Paul are situated in the altar shrine. Paintings on both sides of the altar wings depict scenes of St. Peter´s and Paul´s life. It is supposed that a painter Master Nicholas of Levoča and one painter of Pauls workshop participated in painting them.

Two Marys in the shrine from the Altar of Two Marys.  It was transferred to this church from the village of Kurimany.

It is supposed that the sculptor was an apprentice of Master Paul. He was specializing in robes, as they are done elaborately. However, faces and hands are not as accomplished.

The Two Marys are depicted carrying the spices to Jesus´tomb. 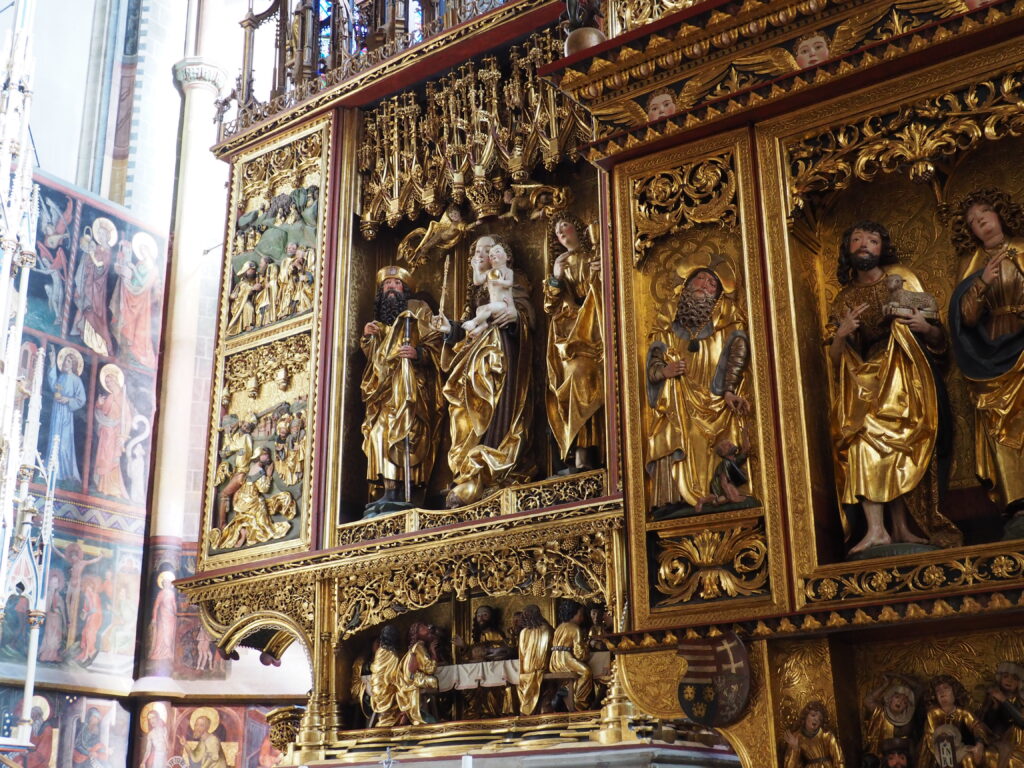